Download the PDF of this article here:  Critical number concepts – the first three years
Check out a video for my Top 5 Diagnostic Tasks in Lower Primary here
Watch our free full-length recorded webinar on Key number concepts for F-3 here.

It would be lovely if we had time to teach every concept in maths in the best possible way.  Unfortunately, we often don’t have that much time.  We need to know which concepts are the most critical to spend time on and which can be given a more cursory approach.  I would like to share with you two concepts in number that I have found are the most critical to get right in the first three years of school after working with several thousand children.  In our next edition I will share the three most important number concepts for grades 3-6.  Between them, these five concepts consistently form over 50% of NAPLAN questions each year as well as being pivotal for development of later concepts.

Quantity:  What changes a number (and what doesn’t)?

One of the first concepts that kids need to establish is number conservation: that each number is unique, as well as what changes a number and what doesn’t.  Far more kids than we often realise come to school with the concept of 1, 2 and “lots”.  They tend to go unseen in our classrooms, so I want to share one of my experiences with you to illustrate what happens.

“Madeline” was a grade one student who could confidently count to 100 in 1s, 5s and 10s and count to 50 in 2s, all with one-to-one correspondence.  She was having difficulties with adding, particularly with regrouping.  Her teacher asked me to find out what was wrong…

I began by asking Maddy to get five unifix blocks.  She got eight.  Now this was not very unusual in the class, but the teacher typically responded, “No Maddy, I said five.”  She then took 3 blocks away from Maddy and sent her off to do the task.

The problem was evident in Maddy’s actions, but remained undiagnosed because of her counting skills.  So I asked her a very simple question, “Do you have five blocks?” to which Maddy replied, “Yes”.  I asked her to count them.  She pointed to each one in turn and confidently counted “one, two, three, four, five, six, seven, eight”.  So I asked again, “Do you have five blocks?” to which she replied, “Yes”.  Maddy’s teacher at this point began to look significantly concerned.

I clicked the five unifix blocks together into a single line and then repeated with the eight blocks.  The line of eight blocks was clearly longer than that with five blocks.  Yet Maddy persisted in thinking that there were the same amount in each line, and believed that both were “five”.

I reduced the number of blocks to three in one of the lines and five in the other.  Yet again the same misconception persisted.  It wasn’t until one of the lines became two blocks and the other was three blocks that Maddy’s answer changed.  She was very emphatic in her answers that those were different numbers.  She demonstrated by breaking apart the two and holding one in each hand.  Three didn’t work like that so it must be different… as must 5 and 8. 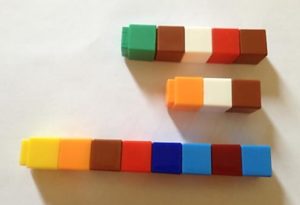 Maddie’s blocks:  She thinks these are all five…

To diagnose problems like this try these simple tasks:

The picture below and video segments above shows the results of this final diagnostic question in a Fountation class from our Professional Development videos.  The students with stars next to the six copied off someone else! 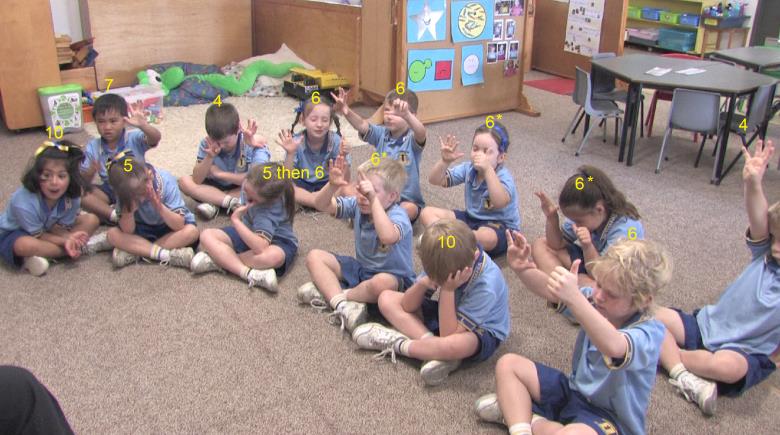 When we repeated this task three times, only three students consistently said that there were still 6 blocks.  They didn’t understand that moving the blocks around could not change how many there were.

Establishing the concept of what changes a number and what doesn’t is very important to establish in the first years of school.  Imagine what happens when a child has not firmly established this concept prior to introducing place value.  You have probably taught a child like this.  Number conservation is critical to establish in Foundation and Grade 1.

One of the activities that I most enjoy doing with 4-6 year olds is asking them to show me five fingers, but made using both of their hands.  The next step is to get two kids to work together and make five fingers, then to use all of their hands to make five fingers.  This is a great partitioning activity as it shows very clearly whether students actually understand five, or whether they just know that holding up a hand is called “five”.  It can take students quite a long time and a lot of thinking to work out how to make five using the fingers from two, three or four hands.

Another of my favourite tasks is to get kids to make a group with six feet, then to introduce another person to their group and ask them to still make six feet!

My final partitioning task involves starting with a set number of objects and then hiding some.  I ask the students to work out how many objects are hidden.  This is even more complex if I use two hands and hide the same number of objects in each hand.  For example, starting with 8 objects, I could hide 2 in each hand and leave 4 behind.  The kids have to work out how many objects are in each of my hands.

Here are a few of the most common misconceptions that I have seen when kids are trying to partition single digit numbers:

Jack, who is six, drew the picture above.  He was trying to arrange his eight blocks into two bowls.  You can see that he originally decided that there must be 4 and 6, even though he was only given 8 blocks.  When I asked him to place his blocks on top of the blocks in his drawing he worked out that 4 + 6 would not make eight.  He crossed out the extra blocks.

This misconception reflects how much work we tend to do with ten facts in lower primary.  When Jack saw 4 blocks, he immediately associated the number 6 with it even though he did not know why or how many there would be!  We need to make sure that we partition lots of different numbers, not just ten.

Partitioning is critically important to get right in Foundation, Grade one and Grade two because if students can’t partition into small numbers then it is almost impossible to successfully partition into tens and ones when introducing place value.  I usually recommend that Foundation and Grade one classes build partitioning activities into their maths time every week.  For more ideas about how to use partitioning, please click on this link and read the article called “A word to HOCs” in issue 9 of The Insightful Classroom.

In the meantime have fun implementing these and watch the next issue of The Insightful Classroom for our next installment!

(c) Kennedy Press.  All images and videos used with permission.

This entry was posted in Content Teaching Tips, Leaders, Misconceptions. Bookmark the permalink.