The danger of “either/or” teaching

Ending the debate: Which teaching approach is most effective?

In 1997 a landmark study in the UK decided to define effective teaching using student improvement data… if you haven’t read it, the findings might be surprising

When I first started researching effective teaching I remember being horrified at the lack of student data that was used in educational research papers. Mostly it seemed that researchers just came up with a theory, wrote the background for why it might work, got a few example quotes from a handful of kids and then published the papers. And nobody ever checked to see if the theory actually worked to improve results before pumping it out en masse in our classrooms. Seriously scary stuff! But then I came across a study by Mike Askew, Dylan Wiliam and their team[1] from the UK involving over 2000 students and 90 teachers, and everything changed.

In a nutshell, they found that teachers’ beliefs had a profound influence on how effective they were.

They classified teachers into three groups:

So what did they find?

While very few teachers fit exactly into one type,

“it was clear that those teachers with a strong connectionist orientation were more likely to have classes that made greater gains over the two terms than those classes of teachers with strong discovery or transmission orientations”[2]. 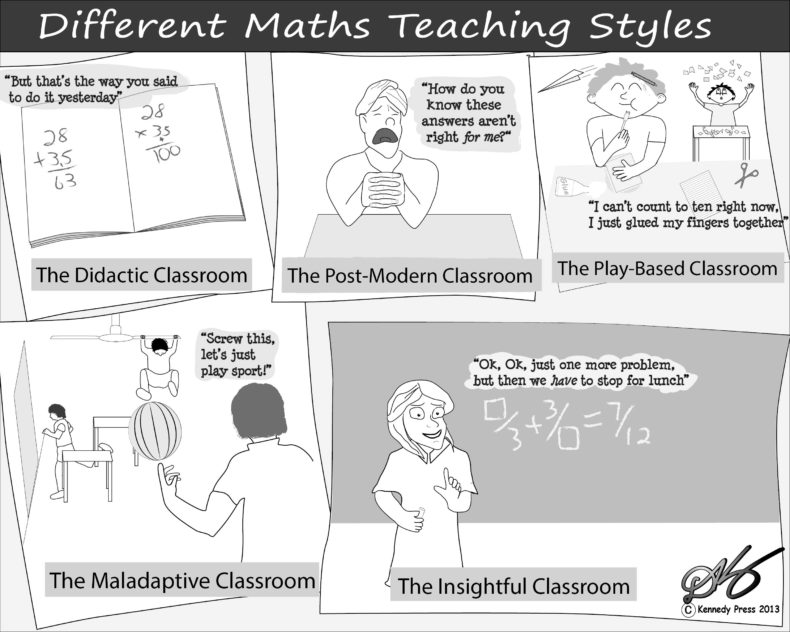 What did the highly effective teachers do?

What does this mean for us?

It’s dangerous to think that either Discovery/Constructivist or Direct/Explicit approaches hold all the answers. If kids just explore randomly, they are unlikely to discover the underlying patterns and principles that make maths work. If we only ever tell kids what to think, when are they going to have to think for themselves and build new connections?

We need to stop being afraid to ask challenging problems:

We need to explain and practice once students have done the thinking:

We need to focus on the connections instead of covering content:

We need to be “both and” teachers, not “either or” teachers. We need to help kids create connections.

[2] Quote from the Paper presented at the British Educational Research Association Annual Conference in 1997 from the same study:   http://www.leeds.ac.uk/educol/documents/000000385.htm

This entry was posted in Classroom Tips, Leaders. Bookmark the permalink.