Place value is one of the Big Ideas in number identified by Dr Dianne Siemon during the National Middle Years project as pivotal for later mathematical development. Students who are missing place value concepts in middle primary school are in significant danger of failing high school mathematics.

We often ask students to make representations of numbers with blocks, write numbers in words, in digits and in expanded notation, order them and perform simple operations.  All of these activities focus on the concepts of partitioning (e.g. breaking 34 into 3 tens and 4 ones) and absolute size, but miss one of the underlying concepts in place value that I have found causes the most difficulties for students. I call this Relative Size. Simply put, it is the understanding of how big numbers are when compared to each other. Many students who can succeed at rote place value activities do not understand that 800 is further away from 1000 than 100 is from one. Difficulties with relative size often tend to go undiagnosed in normal classroom routines, with teachers struggling to find out what is holding a particular student back. With this in mind, here are a few simple diagnostic tasks to try with your kids.

Grade 2/3: Parts of a hundreds board

Draw 6 squares into a cross shape. Explain to the kids that this is part of a hundreds chart. 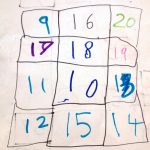 They need to work out the missing numbers. At the top of the cross write the number 16. Check to see that they understand that the numbers increase by 10 when going down and by one when moving from left to right. You can see here from Brittney’s chart that she hasn’t developed an understanding of this pattern yet and is rote counting by ones.

Tape one straight line of masking tape most of the way across your classroom. Place 1 MAB cube at one end, and 1000 MAB cube at the other end.  Ask each child to draw the number line on their A3 piece of paper with the 1 and one end and the 1000 at the other. Tell them to write where 10 and 100 should go on the line. Common misconceptions to watch out for include: equally spacing the 10 and the 100, placing 100 in the middle, placing 100 at about one quarter of the line’s length (closer to the one), and placing the 100 up near the 1000 because it is a “really big number”. I have used this diagnostic task with several thousand students and have found that this concept is missing in approximately 80% of year threes. The more concerning result is that this concept is still missing in approximately 50% of year sevens.

Ask the students to make 23.7 using MAB. Watch for students who think that it can be made by using 23 blocks, then leaving a space or putting a dot, and then making another 7.

If they do this, push the blocks back together and ask what it is now (they may say 30 once the space or “dot” is no longer showing, but think that the 30 turns into 23.7 as soon as a space is visible). These students may also think that 23.7 becomes 24.6 if one of the “point seven” blocks moves across the point to the other side, or that 23.7 becomes 7.23 if you rotate it. Separating 30 blocks is not the same as 23.7! Decimal numbers are about relative size, not about a dot. Watch out as well for students who want to make the “point seven” by cutting one block into halves, quarters, eighths, or sevenths rather than into tenths.

This entry was posted in Content Teaching Tips, Misconceptions. Bookmark the permalink.