The time crunch: buying yourself an extra hour every week 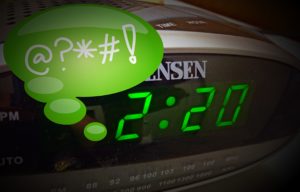 I firmly believe that the most important and most effective thing that we can do with our classes is problem-solving.  And yet far and away the biggest complaint that I hear teachers express on Professional Development sessions is their lack of time.  So here is my proposition to you…

What if I could magically make an extra 40-60 minutes of maths teaching time in your week, every week?…  Would you then promise to take time out of your existing maths schedule to do problem-solving with kids?

If you can spend the five minutes that it takes to get to the end of this article then I promise to do exactly that.  To get to this, we need to start by thinking a little “outside the square” and enter the realm of philosophy.

A philosopher entered into his class and placed a large glass jar on the desk.  He placed several large rocks into the jar until there was no room for any more.  He posed the question to his class, is the jar full?  They all agreed that it was.

The philosopher then reached into his bag and removed some pebbles which he proceeded to tumble into the jar, surrounding the large rocks.  Repeating his original question the philosopher asked if the jar was now full.  The students agreed that it was indeed now full… until the philosopher removed a sachet of sand and began to pour the sand into the jar, filling up all of the space between the pebbles.  When the students posited that surely now the jar must be full, the philosopher produced a glass of water and added this to the jar as well.

His point was simple and fairly well-made: to have a full life we must firstly add the important things.  These alone make for a full life, but once these are in place we can also add in extra things.  If we start by focusing on the small issues – the sand of life – then we will never be able to fit in the large rocks.

This same thinking can be applied to a maths classroom to great effect.

Throughout our year we have certain large rocks – the most important things that need to be done well and have large amounts of time devoted to them.  These underpin everything else, and if they are missing our students will suffer.

We also have pebbles.  These are the annoying, irritating things that tend to eat up large amounts of our time and that are unavoidable.  NAPLAN, report cards, student behaviour, implementing various policies and reteaching previous concepts might be examples of some of these.  I’m sure you can think of numerous examples.  If we get caught up with these then we risk not getting the most important things done.  Think about how many schools you know that abandon all good teaching in the month prior to NAPLAN.  We simply don’t have the time to allow a pebble to steal an entire month of our teaching from the big rocks!

The magical time-saving that I am talking about though comes not from the pebbles, but from the sand…

Try adding up the amount of time each week that you spend on the following:

So here’s my proposal:  If we could put this “sand time” to good use, then we would magically create an extra hour of teaching in our weeks, every week!

Making use of sand time:

My premise is that Fluency is actually best taught in regular, small packets of time rather than in dedicated hour-long lessons.  Spending long periods of time practicing or memorising is boring.  Spending two minutes on a game is much more fun, and spending five two-minute segments of time on a fluency game during the course of a day is often far more effective than one ten-minute segment.

Here are some of my favourite two-minute fluency tasks that can make great use of your hour of “sand time” freeing up larger rocks in your schedule.

When outside your classroom:

When inside your classroom:

Another advantage of using this “sand time” to do Fluency is that students tend to become much more efficient in their normal calculations.  This means that when students are practicing a skill, their practice questions take far less time – magically creating you even more time!

… So now that we have all this extra time, how should we best use it?

Problem-based teaching is an incredibly effective tool for improving student results rapidly and permanently.  The idea is fairly simple – when introducing new content, start by posing a problem to solve rather than by providing an explanation to memorise.   Use this process to encourage exploration and experimentation by the students, and in the process uncover their deeply-held misconceptions.

Deep understanding requires connections to be made, principles to be uncovered and misconceptions to be confronted.  It is not something that can be told to students – they need to experience it for themselves.  To be truly effective teachers we need to stop doing all the thinking for kids – the more they think, the better they will understand.

Simply put, if we want kids to learn differently… we will have to start teaching differently.

This entry was posted in Classroom Tips. Bookmark the permalink.